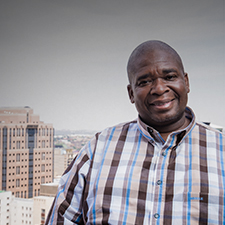 Entrenched in the inner city, Pressage has lived in Johannesburg’s inner-city since 1987, joining ActStop Civic Organisation that year. Since then he has been extensively involved in the city’s urban development and regeneration. In 1992 Pressage joined the 7 Buildings Project, becoming General Manager of the company until 2000. He then added experience in property administration and financial management to his skills in inner-city development activism. Pressage has worked with TUHF since 2003, joining permanently in 2004.